“Kolkata” the City of joy, which has never disheartened anybody. World famous for its colonial architecture, food, festival, literature and art. I too loved everything about Kolkata, the yellow taxi, sweet Bengali language, delicious food, passion for art, the tram, Howrah bridge, Victoria memorial, Chourangi and many more. The place where I got my first pay check. The sky, which took me on top so many times and the clouds which has cleared my dilemmas.

Amidst of everything being super awesome about Kolkata, the only problem was “its hot  & humid summer season”. The high relative humidity which results in excessive sweating without the sweat evaporating from your body. For us, getting an afternoon flight in that soaring temperature used to be terrible. Loaded with makeup, drapped in a saree, maintaining a smart body posture enlightened with a soothing smile becomes a challenge to maintain.  The roster in charge confirmed CCU-IXS-CCU (Kolkata- Silchar) departure time 12.45 pm to me.

This was an ATR 42-320 Aircraft, a twin turboprop, short-haul regional airliner. The number “42” in its name is derived from the aircraft’s standard seating configuration in a passenger-carrying configuration, which typically varies between 40 and 52 passengers. Less passengers, less work (compared to Boeing ‘s 119 load), and more flying time. We loved flying ATR but during summers, the hot cabin of the parked aircraft was terrible to deal with.  The AC unit gets effective after the propellers reaches certain RPM. And all these aircraft’s doesn’t have an APU (Auxiliary power unit), so maintaining the cool temperature in cabin with just GPU (ground power) was difficult in 40 degree Centigrade during the month of June. The reporting time in aircraft was 40 mins before departure.

So, that day also we were there, busy with the checks, and catering checklist. There was a wheel chair and an UNM ( unaccompanied minor, a kid). Lots of formalities to be done,and as the aircraft was parked from quite sometime so as expected it was hot inside. In makeup one feel more sweaty, and heavy. The cockpit started one of the engines and propellers started. The boarding began and I smilingly stood at the gate to greet passengers. The heat waves kept on hitting me there. Though now, the cabin was getting better, every minute. Each passenger was trying to suck all the air coming from the air louvers on there face. Really, that cool dash of air…feels so good. I wanted to experience the same with the lavatory air louver but the call buttons for cotton, water, sickness bag and pillow kept me busy.

The requirement is of two flight attendants in this type of aircraft. The stations were near the aft exit and next to the forward emergency seat. In front of the forward cargo facing the cabin. It means the crew who sits there , for the take off becomes the center of attraction for the entire cabin until aircraft reaches 18,000 ft. And I have to admit sitting there, feels immensely awkward. We desperately use to wait for the seat belts signs to go off, as how long can you sit with alternate smiling and straight face.. 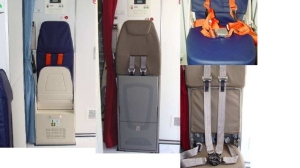 Having a friendly or an over friendly passenger in flight was quite regular, and after few months you get to know how to tackle those looks or over friendliness behavior etc. So, I was fine too. In this flight there was a happy pax, who wanted to know more about the aircraft, commander, flying time, the place I belong to, the meaning of my name…and what not. You know…how few lonely travelers loves to talk to unknown people. So, after attending his calls, I went to sit to the forward jump seat for the take off. And as expected , I found him looking at me. I was still sweating, so was dabbing my face with tissue to save my green blue eye shadow and my linear. I got cooled in 2 mins..and sat there ignoring contacting his eyes, which I felt was at me.

We reached at the safe level and seat belts got off. He again tried approaching me as I passed him. I was already irritated and was ready with a stern answer..so turned to him.

Him: Mam, it seems you came from a snowy place!!…and he smiled

Me: I took another cold breathe somehow controlled my emotions and said Ohh!! really!! and why do you think soo!!

Him: As you have snowflakes all over your face.

What!! I looked confused. He giggled…

The other crew was busy with heating meals, I ran to the lavatory and saw my face decorated with tiny pieces of tissues all over.

My God!! I was damn embarrassed.. I fixed it with non stop giggling inside.

As I, narrated the incident to the other crew…she giggled for rest of the flight.

I restricted myself going in the cabin for the service and touching the tissues. I took the cockpit call and galley.

She did the cabin. Though, I thought of facing him, so did the collection, smiled and said thank you to him.

Anytime… and excuse me ” May I have an extra tissue pls”….. He said!

Of course!! I went to him with a big bunch of it and said..”You can keep all, it is pretty hot outside.

Service done, seat belts signs appeared again and I had no choice than to smilingly sit at my throne.

While deplaning he said...Bye! mam! Enjoy the snowflakes..

I sure will, I replied.

Commander was beside me… What! Snowflakes! Now!! Who is giving it?? I simply smiled..and whispered “The JUMP SEAT” !!

The incident hold its freshness….till today.

Hope you all enjoyed reading the series of “funny encounters”, as much as me and my family . Don’t forget to like my stories, share  and comment.

Two buns… in your tray Funny encounters in Airplane…episode#2

Do not touch the life jacket unless announced Funny encounters on a Plane..Episode # 1

and the snowflakes when you fly an ATR.